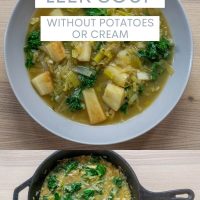 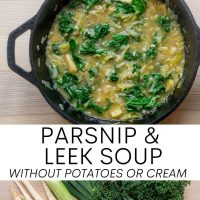 Are you looking for the perfect, hearty leek soup without potatoes? Well, look no further.

Traditionally, leek soup is not a standalone fare, it normally is made with potatoes and then blended up into a smooth puree, the results being flavourful, albeit starchy and lacking in texture. I thought that this traditional method could use a bit of an update.

So instead of potatoes, I swapped in parsnips and instead of pureeing the soup, I left everything in there to add a bit of texture — a lot like my winter root vegetable soup! Unlike some other pureed soups I’ve developed to make without a blender (like my pumpkin soup or my carrot soup), I decided to forgo any type of pureeing at all.

To tie it all together, I threw in some kale for a bit of fresh greenery at the end. The result? A delicious parsnip and leek soup without potatoes that is absolutely delicious and super quick and easy to throw together!

How to Make Parsnip & Leek Soup

So let’s get into this leek soup recipe without potatoes! It’s really easy to throw together and doesn’t use too many ingredients so you should be tucking into delicious soup in no time. However, if you’re looking for a similar soup that does use potatoes, check out my leek & potato soup recipe — it also uses absolutely no special equipment!

First and foremost, you need to brown your parsnips. I do this step first because it adds to the flavour of the soup overall, rather than simply boiling them in the broth.

So melt a bit of butter in some olive oil in a large saucepan over medium heat. Add your parsnips (cut into bite-sized pieces) and ensure that the flat, cut side is facing down, this will ensure optimal browning.

Don’t agitate the parsnips until about 5 minutes have passed, then just move one to see how the browning is going along. If the bottom is deeply golden brown and caramelised, then go ahead and remove the parsnips from the pan.

Add a bit more butter and oil into the pot and then add in your leeks along with some minced fresh rosemary and thyme and, for some umami and depth of flavour, an anchovy fillet.

If you want to keep this soup completely vegetarian, then feel free to leave it out. The flavour just won’t be as complex. It is worth noting that the anchovy won’t add any fishy flavour, just a bit more nuance – it’s the same reason that I use it in my beef stew recipe, as well. Also, as this is a leek soup without cream or dairy of any kind, leaving out the anchovy would also make it completely vegan!

Once the leeks have softened and turned a bit translucent and the anchovy fillet has completely dissolved (after about five to ten minutes), add in a couple of cloves of minced garlic. Stirring constantly, cook the garlic until it’s very fragrant, about a minute longer.

Now it’s time to add your parsnips back into the pot. Then, pour over a couple of teaspoons of soy sauce (this will, again, add a bit more complexity to the broth). Stir this all to combine and then pour over your vegetable broth.

If you’re not using homemade veggie broth in this leek soup without potatoes recipe, then make sure you’re using a low-sodium brand of store-bought broth. The saltiness added by both the soy sauce and anchovy will be a bit overpowering if you also add in a bunch of salty veggie broth. So that is just something to be aware of.

Give everything in the pot a good stir to make sure it is all combined and then bring the soup up to a gentle simmer. Cook the soup until the parsnips are tender but still have some bite to them, about ten to fifteen minutes longer.

You don’t want the parsnips to cook for too long or otherwise they will get a bit too soft and all of the wonderful texture we are creating in this non-pureed leek soup without potatoes recipe will be for nought.

Once the parsnips have cooked through, it’s time to add your kale. If you don’t like kale (or can’t find it) feel free to substitute with any other hearty leafy green that suits your fancy — chard or beet greens would work great here, for instance! You could leave the greens out altogether, but I really think they do add something to the soup (I wouldn’t have included them if I didn’t!).

I tear the kale up into bite-sized pieces and discard the woody stem. It may look like way too many greens but I assure you they will shrink considerably once they’re in contact with the hot soup. Add your kale and stir to fully disperse into the pot. Cook the greens until they are just wilted but, again, still have some bit to them, only about three more minutes.

Then, all you need to do is give the soup a taste and adjust for seasoning, adding a bit more salt and a grind of pepper if needed. Next, ladle a bit helping into a bowl and serve with some crusty bread! Dig in and enjoy!

Leek soup without potatoes can seem preposterous until you sample this delicious parsnip leek soup recipe. requiring absolutely no special equipment and coming together in less than an hour, this is sure to become a quick favourite in your kitchen!

Are you searching for a leek soup recipe without potatoes? Have any questions about this recipe? Let me know in the comments! 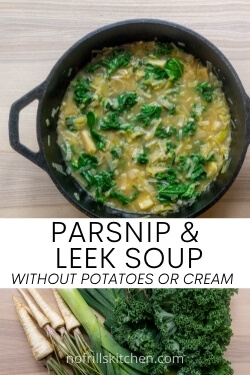