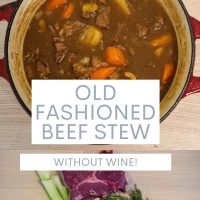 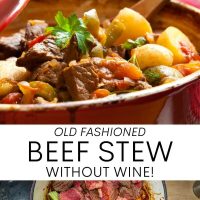 Nothing warms up a cold winter’s day quite like a hearty and savoury beef stew. Though making one can be a time-consuming process, there are few ways more rewarding to spend a chilly Saturday than letting a stew bubble away all day. But what if you are all set to get cooking and realise that you don’t have (or don’t want to add) a key ingredient in most stews? Not to worry, because I’ve developed a rich a savoury old fashioned beef stew recipe without wine that is sure to knock your socks off.

In many instances, making a beef stew and simply substituting the wine called for in the recipe for more stock can cause the flavours to fall flat. In this recipe, I tried to remedy that by adding a number of different things to try and boost the umami to the max.

The result is an incredibly flavourful, hearty and delicious beef stew that is sure to warm up even the coldest of days. So if you’re wondering how to make an incredible beef stew without wine, you’ve come to the right place. Though this recipe can be a bit fastidious and involved, it is well worth the time and effort put in as the results are really fantastic.

How to Make Beef Stew Without Wine

So let’s jump right into it – how do you make an incredible traditional beef stew without wine?

In practice, it’s relatively easy however there are a number of steps involved. Keeping this in mind, make sure that you set aside enough time to properly execute this recipe and make sure you read the whole thing before getting started (which is really what you should be doing for all recipes).

We will start with browning the beef. I’ve found that you tend to get better browning (and I also think it’s quicker and easier) if you actually brown the beef before you cut it into pieces.

You will likely still need to break the chuck roast into three or four pieces to fit into your Dutch oven, however, browning it like this makes it easier to get a proper sear and you can reduce the risk of steaming your meat instead of browning it.

So over high heat in a large Dutch oven, heat about a tablespoon of neutral oil until it just begins smoking. Generously season your beef with salt and pepper and add it to the pot.

Sear on one side until it’s deeply browned before flipping and searing on the other side. This should take about five minutes or so per side. Once the meat is browned, remove it from the pot and set it aside on a plate or tray until we need it again. You will find that the technique used here is similar to that used in many of my other braises, as well – like my braised lamb shanks, for instance.

Reduce the heat to medium and add your quartered crimini mushrooms. Cook the mushrooms until they’ve reduced in size and have begun to take on some colour, about five to seven minutes or so.

Add two anchovy fillets and the diced onion and cook until the mushrooms continue to brown and the onion softened and turns translucent, another five minutes. Make sure to scrape up any browned bits off the bottom of the pot as the mushrooms and onions release their moisture.

Now, stir in the tomato paste. Cook the tomato paste until it begins to darken in colour and gets a bit sticky on the bottom of the pot, about two minutes. This step is essential to develop another layer of flavour and to also cook out the tinny flavour that tomato paste can have.

Add the minced garlic and cook just until it’s fragrant, only about thirty seconds to one minute longer. Sprinkle over a bit of flour (not too much because you don’t want your stew to be too thick and gloopy) and cook for another minute or two.

Then, pour over some Worcestershire sauce and some fish sauce to deglaze the pot. These two additions, along with the anchovies added earlier, are what is going to give this beef stew recipe without wine a complex (and mildly acidic thanks to the Worcestershire sauce) flavour due to the glutamates in these ingredients. There are more uses for fish sauce than simply in stir fries!

Don’t be concerned that the fish sauce and anchovies will lend a “fishy” flavour to the stew – they won’t. They just simply work together to enhance the savoury aspects of the stew and will end up just making it taste more “beefy.” This is why I use anchovies and fish sauce in a number of my other recipes, as well, such as in my parsnip leek soup.

Add two carrots that have been cut in half and a few halved stocks of celery to the pot. Cut your beef into large cubes (keep in mind that the beef will shrink while cooking when determining the size to cut them). Add the beef to the pot along with any accumulated juices on the resting plate.

Next, pour over the chicken stock. I always recommend using homemade chicken stock over store-bought, but if you use store-bought stock, make sure it is low-sodium. I also think using chicken stock is better than using store-bought beef stock as there is usually a lot fewer flavour additives in chicken over beef stock. It’s the same reason I use it in my French onion soup recipe.

Tie a few sprigs of rosemary and thyme together with some butchers twine and add it to the pot.

Bring the stew up to a simmer before partially covering the stew with a lid and moving to a 150°C/300°F oven. Cook for about an hour and a half before removing from the oven and then fishing out the halved carrots and celery stalks. These have given up all of their flavour at this point so you can discard them (I reckon they would make great dog treats, as well!).

Add some peeled and sliced carrots to the pot along with some quartered new potatoes. The reason we add them in at this point in the cooking is to ensure that the potatoes and carrots don’t get overcooked.

Partially cover the pot again and return it to the oven and cook for another forty-five minutes to one hour. You’re looking for the carrots and potatoes to be fork tender and for the beef to hold its shape but still be able to be cut easily using a fork. Remove the stew from the oven and set over medium-low heat to maintain a brisk simmer.

In a small bowl, add a bit of water and sprinkle over some gelatine powder. Do not stir, simply wait until the gelatine is fully hydrated. We use gelatine in the stew to thicken it and maintain a good mouthfeel.

You can leave it out if you’re using a really gelatine-rich homemade chicken stock (you’ll know it is if it jiggles when cold) but it needs to be included if you’re using store-bought.

Once it’s hydrated, add the gelatine to the pot and stir in. Simmer for another five minutes or so just to slightly reduce the sauce. If you want, you could also use this time to add some frozen green peas. If I were just making this for myself, that’s what I would do but I leave them out as Michael really doesn’t care for them.

Now all you need to do is portion out and serve! This stew is great on its own or served alongside something like my fresh broccoli salad.

Though it takes some time and a number of steps, this old fashioned beef stew recipe without wine is absolutely delicious and well worth the time it takes to make!

Are you wondering how to make beef stew without red wine? Have any questions about this recipe? Let me know in the comments! 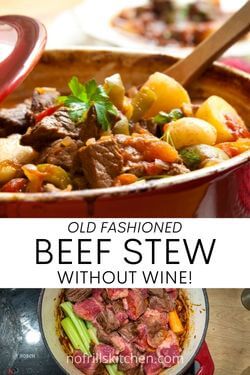