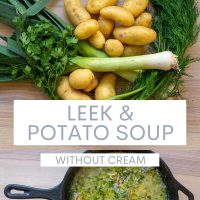 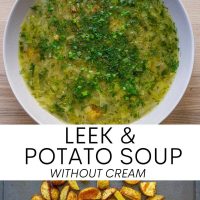 Do you want to make a delicious leek and potato soup without cream? Whether you’re not a fan of creamy soups, are trying to cut back on your excess fat intake or simply are looking for a vegan version of a classic favourite, there are lots of reasons to make a yummy potato leek soup even if you don’t want to go the traditional “pureed with cream” route.

In fact, I don’t actually prefer traditional potato leek soup. I don’t have any issue with pureed soups (I’m a big fan of my cauliflower soup my pumpkin soup and my carrot soup, for instance) but I do tend to like a soup with a bit more texture (see also my root vegetable soup recipe or my pasta e fagioli recipe). It also helps that leaving out the pureeing step makes this soup super (pun intended!) quick and easy to throw together.

So if you’re looking for a very leek-y soup with delicious roasted potatoes that sacrifices nothing in terms of flavour but is completely vegan, you’ve come to the right place!

This leek and potato soup without cream doesn’t even require a blender and you can be digging into a steaming bowl in about thirty minutes!

How to Make Leek and Potato Soup Without Cream

So how do you make this amazing potato leek soup without a blender, without milk or cream and without chicken broth? Well, it’s extremely simple actually! And if you’re after a recipe for leek soup without potatoes, make sure to have a look at my parsnip leek soup recipe!

The first step is to roast the potatoes. I recommend doing this rather than simply boiling them with the rest of the ingredients for two reasons: 1, it prevents the potatoes from waterlogging and 2, it adds another level of flavour.

You can use whatever kind of potatoes you would like, but I would suggest using a waxy variety like a Yukon gold, new potato or red potato. This will further prevent the aforementioned waterlogging.

Red potatoes, in particular, add a good colour contrast to an otherwise relatively monochromatic soup. And there is nothing wrong with potato leek soup with red potatoes.

Cut your potatoes into bite-sized pieces, toss them in a bit of olive oil and salt and pepper, lay them out on a baking sheet and put them in a 220°C/200°C fan oven (425°F/400°F) until they are golden brown and fork-tender, about twenty minutes or so. Pull them from the oven and set them aside while you assemble the rest of the soup – this is the same process I use in my corn chowder recipe!

As you’re cooking the potatoes, take the time to prepare the basis of the soup. Step one is to prep the leeks. As leeks are grown in silty soil and have countless layers to them, you need to make sure that they’re really thoroughly rinsed so avoid any grit in your leek and potato soup without milk or cream.

So, thinly slice your leeks and then transfer them to a colander set inside a large bowl filled with cold water. Rinse the leeks until the dirt falls to the bottom of the bowl and then drain the leeks.

Now, in a large saucepan over medium heat add a couple of tablespoons of olive oil and heat until shimmering. Add the leeks and a generous pinch of salt and cook them until they’ve shrunk down considerably and have softened. about five minutes or so.

Then, add a good amount of garlic and a hefty amount of fresh dill, parsley (flat-leaf please!) and chives. Stir these into the leeks until everything is fragrant, only about a minute or so.

Then, dust about a tablespoon of flour over the leek mixture and cook this until the raw flour smell dissipates. This will help thicken your soup just sightly and give it a more creamy consistency without adding cream or milk.

Once the flour is cooked, add your cooked potatoes and then pour over about a litre of vegetable stock.

To add a bit more oompf and umami, stir a splash of dark soy sauce as well. If you don’t mind about making this soup vegetarian, consider using chicken stock and fish sauce instead. I don’t include that in the recipe because I really wanted to make a leek and potato soup without chicken broth.

Bring this all up to a simmer and let the flavours get to know each other a bit – about five minutes. The soup will thicken slightly because of the flour, but not significantly. It’s not supposed to be overly thick.

Then, turn off the heat and stir in a splash of white wine or sherry vinegar to add just a bit of brightness. Taste the soup to adjust for seasoning, and that is it!

Because I made this a chunky soup, this recipe has no means to puree it. So it’s also the perfect recipe for those looking to make leek and potato soup without a blender!

All you need to do now is portion it into bowls and maybe top with a few more fresh herbs before serving!

This potato and leek soup without cream, milk or chicken broth that also doesn’t use a blender is an easy and delicious soup to make for any occasion!

Do you have any questions about this potato leek soup recipe? Have you made a leek and potato soup without cream before? Let me know in the comments! 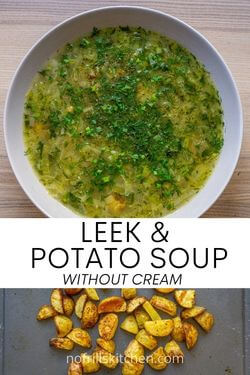