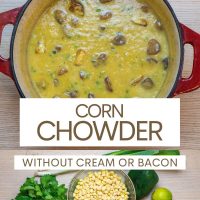 It seems like every corn chowder recipe I have come across includes bacon and cream, milk or some sort of dairy substitute. That got me thinking – is it possible to make a delicious, creamy and hearty corn chowder without cream or bacon? Is it possible to make it without any kind of dairy substitute at all? It turns out the answer is a resounding yes.

Far too many vegan corn chowder recipes simply replace any kind of dairy with coconut milk or some other kind of substitute and I didn’t want to do this.

Firstly, I think that the addition of coconut milk would add an off flavour that I don’t think goes well with corn. And second – my view with going dairy free in this recipe (and bacon-free) was also to try and reduce the fat content a bit and coconut milk contains quite a lot of fat.

I tried hard to lean into a strong corn flavour and tried to boost some other elements by roasting the potatoes and poblano pepper. The addition of soy sauce adds an umami element that doesn’t necessarily replace bacon, but it certainly makes it deep and delicious.

So if you’re looking for a vegan corn chowder recipe without cream, bacon or coconut milk, look no further. This recipe is sure to hit the spot.

How to Make Corn Chowder Without Cream or Bacon

This creamy corn chowder recipe without bacon is quite easy to make, but there are a few steps so make sure to read all of the instructions (either here or in the recipe card) before taking on this task.

The first step is to roast your potatoes and poblano pepper. If you can’t find poblanos (I know they’re actually very hard to come by where I live), there is no problem just leaving it out in this recipe. You can build the rest of your soup while the potatoes are roasting.

Cut your potatoes into 1.5cm cubes and arrange them on a baking tray. I like to make sure that the flat sides are facing down so that I can maximise browning (I use this same technique in my potato leek soup – it’s also dairy free!).

Also, split your poblano (if using) down the middle. Remove the ribs and the seeds and cut into three or four panels and all it, skin side up, to the baking tray.

Drizzle everything with a bit of olive oil and season with salt and pepper. Transfer to the oven and roast until the potatoes are tender and the pepper is beginning to blacken and blister.

Once the poblano has cooled enough to handle, chop it into small pieces and set aside for later.

While the potatoes are roasting, heat a bit of oil in a large Dutch oven or saucepan until shimmering. Add the whites of some sliced green onions and a couple of diced jalapeños along with a generous pinch of salt.

If you want to reduce the heat, you can opt to remove some or all of the ribs and seeds from the jalapeños. For a spicier dairy-free corn chowder, then keep in the seeds and ribs.

Cook the onion and jalapeños until softened and beginning to brown before adding in some cumin and smoked paprika. Cook the spices until they’re very fragrant (only about thirty seconds) before adding a couple of cloves of chopped garlic.

Cook for another thirty seconds or so before turning up the heat a bit and adding half of your corn kernels and chopped roasted poblano if using.

You can use fresh corn here, but frozen corn works just as well if you want to whip up a batch of corn chowder without heavy cream any time of year.

Cook the corn until it begins to toast and brown slightly, about five to ten minutes.

Now, sprinkle over a bit of flour – this will help thicken the soup later. Stir the flour into the corn and cook until the raw smell has decreased, only a couple of minutes. Then, pour over half of your chicken stock and some soy sauce. Bring up to a gentle simmer.

Meanwhile, add the other half of your corn kernels, half of your roasted potatoes and the remaining half of your vegetable stock to the jar of a blender. Blend on high speed for about one to two minutes or until very creamy and fully pureed.

Much like in my cauliflower soup recipe, using a blender here is definitely essential to get a super creamy, emulsified texture here without the use of any cream or dairy products at all.

Pour the puree into the pot and add the remaining potatoes. Stir to combine and bring up to a simmer. Add the green parts of your green onions, some chopped cilantro and a generous squeeze of lime juice.

Taste to adjust for seasoning, adding salt and pepper where needed. Now, all you need to do is serve and enjoy!

Making a delicious corn chowder without milk, cream or bacon doesn’t mean you have to sacrifice richness and deep flavour. Though this soup is completely vegan and doesn’t have dairy or bacon in it, it doesn’t lack anything and is sure to quickly become a favourite!

Are you looking for a great vegan corn chowder? Have any questions about this recipe? Let us know in the comments!