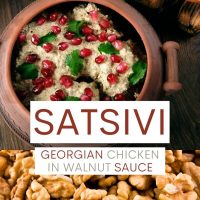 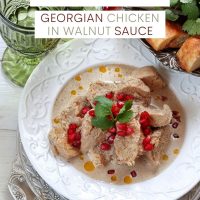 Beyond khachapuri and khinkali, there are few Georgian dishes out there that are as popular and well-known as satsivi and it really isn’t hard to see why. This decadent dish that combines poultry with a luscious walnut sauce is commonly served at New Year’s Eve and Christmas supras in Georgia, however, it is also popular throughout the year. If you’re interested in trying this Georgian chicken in walnut sauce, then make sure to give this satsivi recipe a whirl.

Satsivi, though often served hot (especially outside of Georgia) is traditionally meant to be served cold – the world “tsivi” (ცივი) actually means “cold” in Georgia, however, it is just as delicious if you would rather it be a warm or room temperature dish. Using the copious amount of walnuts (there is a saying that Georgians put walnuts into everything except their wine!), lots of garlic and traditional warm spices, Satsivi is a dish that is sure to delight all those you serve it to.

Though this dish can seem incredibly decadent and robust, there are only a small handful of ingredients and it is relatively easy and straightforward to make. Much like other Georgian chicken recipes (like chakhokhbili, shkmeruli or chikhirtma), it is the combination of just a few ingredients that work together to make this dish so spectacular.

So if you’re interested in learning how to make Georgian chicken in walnut sauce, then look no further — this chicken satsivi recipe is sure to be a winner!

Before I jump into the full chicken satsivi recipe, we do need to discuss exactly what this dish is. As I’ve mentioned already, it is a poultry dish that is submerged in a flavourful walnut sauce that is typically served cold in Georgia. But there is more to it than just that.

Traditionally, satsivi is made with turkey but many Georgians over the years have adapted it to use chicken instead and that is actually the most common poultry you will find in this dish.

Typically, a whole chicken is used, however, I have opted to go a simpler route and only use boneless, skinless chicken breasts. The sauce is so robust and flavourful that you don’t need to bother with an entire chicken.

It is possible to make a cauliflower or eggplant satsivi if you want a vegetarian version of this dish.

The sauce consists of finely ground walnuts mixed with garlic and warm spices and then simmered with water or stock. In Georgia, it’s traditional to use water as the base of the sauce, however, I call for chicken stock in my recipe as I think it gives the dish a more robust and multifaceted flavour.

I’ve also seen the sauce be pureed until incredibly silky smooth or even sieved to remove anything, but I don’t think this is a necessary step. I actually prefer there to be a bit of texture left in the sauce from the walnuts — it’s also easier and doesn’t require any other equipment, both things that I love when cooking!

As mentioned earlier, satsivi is a dish that will almost always make an appearance on the table at a New Year’s Eve or Christmas supra (Georgian feast), however, it is popular to eat all year round. Looked at as a celebratory dish, satsivi is easy and delicious and you’re sure to love it.

How to Make Satsivi

Now it’s time to get to the good part – how one actually makes satsivi! If you love this Georgian dish or are simply looking for something new to do with boring boneless, skinless chicken breasts, then this is a great recipe for you!

First things first, you need to cook your chicken breasts. My preferred method in this is poaching because I think this is the best way to ensure that the chicken remains as tender and moist as possible, which can be difficult in a cut as lean and a boneless skinless chicken breast.

Take your chicken breasts and add them to a large saucepan. Cover them with cold water and a tablespoon of salt and then, uncovered, bring the water to a boil over medium heat. As soon as the water begins to boil, turn off the heat, flip the chicken breasts over, and cover the pot. Allow the breasts to steep in the hot water until they reach an internal temperature of 74°C (165°F). Remove the breasts from the pot and set aside.

Next, it’s time to get to the satsivi sauce recipe. To begin with, you need to grind your walnuts to a very fine meal. The fastest and easiest way to do this is with a few pulses in the food processor, however, you can get similar results with a mortar and pestle (it is what I do).

If you don’t have either of these, then put your walnuts in a bag and bash them with a mallet, pan or rolling pin until the desired consistency is reached. The last method is going to be the hardest and I would highly recommend doing it in small batches so that you can get your walnuts fine enough in order to get the best results.

Transfer your ground walnuts to a bowl and grate in some garlic and add some blue fenugreek, cayenne pepper and cinnamon. Stir this to combine and set aside.

In a large skillet over medium heat, heat about a tablespoon of oil until shimmering and add your finely diced onion. Cook this, stirring occasionally, until softened and lightly translucent but not browned, about 5 minutes. It might be necessary to turn the heat down if your onion is beginning to brown.

Then, add your walnut, garlic and spices mixture to the skillet and stir until very fragrant, only about 30 seconds to one minute. Then, stream in your chicken stock and stir until everything is combined and homogenous. Bring the mixture to a simmer and allow to cook until thickened and slightly reduced, about five to ten minutes longer. Make sure to taste to adjust for seasoning.

Cut your chicken breast into a few thick slices and then add them to the sauce, stirring to ensure they’re completely covered. Turn off the heat and allow to cool before transferring to an airtight container and refrigerating until completely chilled, at least four hours. This is the traditional way of eating chicken satsivi. However, you can also serve this warm immediately after cooking – I promise it will still be absolutely delicious.

Satsivi can be made up to 3 days in advance so long as it’s kept refrigerated and in an airtight container. If you want to keep with tradition, then you can serve it directly from the fridge, however, it also heats up perfectly well.

Satsivi is typically served cold, however, the dish is just as delicious if you prefer to serve it warm, as well.

This Georgian chicken in walnut sauce is one of the most delicious dishes to have come out of this beautiful nation. Refreshingly simple to make but with complex and robust flavours, this chicken satsivi recipe is sure to be a hit amongst your family and friends!

Are you hunting for the perfect chicken satsivi recipe? Do you have any questions? Let me know in the comments! 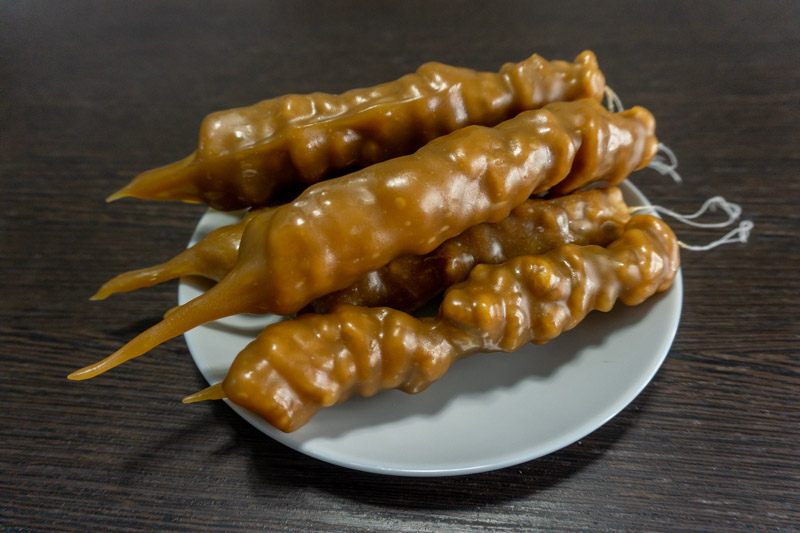 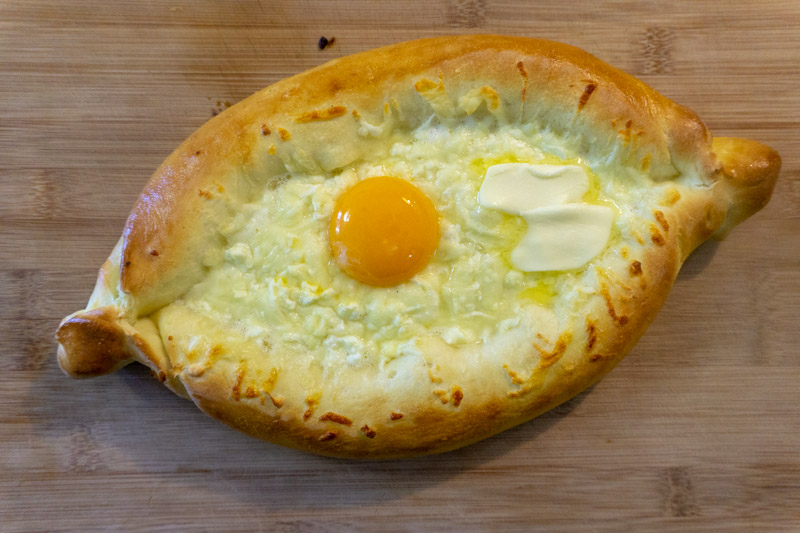 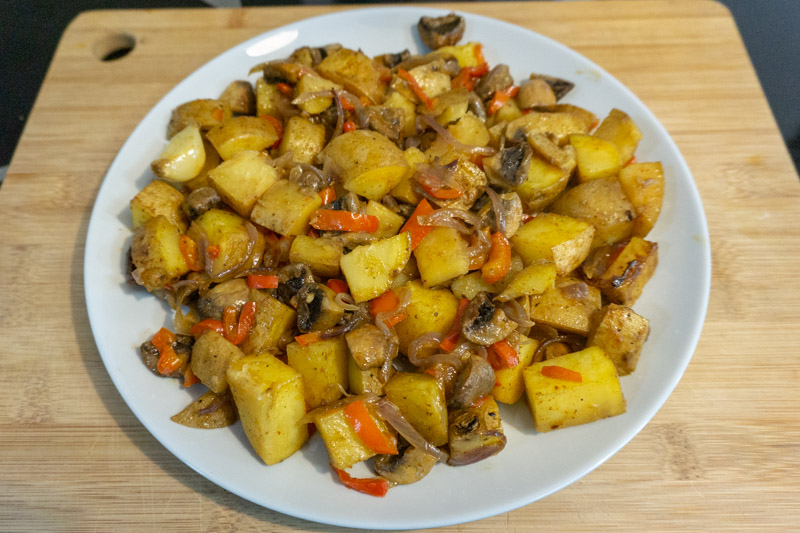