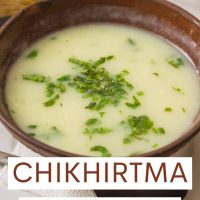 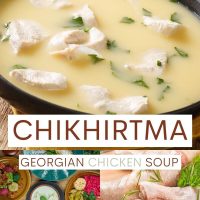 It would seem as if every country in the world that has an established drinking culture also has its token “hangover cure” touted by grandmothers and homoeopathic enthusiasts the world over that this will cure what ails you. In Georgia, there are two such dishes: steamy khashi soup made with beef tripes or a family chikhirtma recipe. The latter is the less offensive of the two to more western palates and is a hearty and delicious soup to enjoy no matter the occasion — no hangover required!

Chikhirtma is so much more than a chicken soup in the traditional sense. Simple to make, it has an added creamy richness by incorporating egg yolks and a vibrant brightness due to the addition of fresh cilantro and a splash of vinegar. It is comforting and an absolutely perfect alternative to a basic chicken noodle soup if you’re looking to explore different world cuisines.

Much like in my lentil soup and pumpkin soup recipes, I do things a little bit differently in this chikhirtma recipe than is completely traditional, however, the results are absolutely delicious and perfect for a cold day or when you’re feeling slightly under the weather.

So if you’re interested in learning how to make Georgia’s favourite hangover cure, then make sure check out this chikhirtma recipe for one of the best chicken soups out there.

Before getting into the chikhirtma recipe, let’s take a bit of time to discuss exactly what this traditional dish is. Chikhirtma is a Georgian chicken soup that is one of the most popular soups you can find throughout the country.

It differs from the more well-known versions of chicken soup that include a clear chicken broth simmered with carrots, celery and onion and maybe a few egg noodles thrown in. And while there is certainly nothing wrong with this version (is there anything better to eat when you have a cold or flu?), the Georgian version really takes it to the next level.

Chikhirtma is simple at its heart but it has an incredibly flavourful broth that is enriched with egg yolks to make it delightfully creamy (without a single drop of it!) and a bit of vinegar and a generous sprinkle of cilantro make it bright and vibrant. This soup is a favourite in Georgia for a reason and this Georgian chicken soup recipe is sure quickly become one of your favourites.

Now it’s time to get into how to make chikhirtma! First and foremost, we need to start with chicken. Most traditional chikhirtma recipes you will find out there will recommend that you put a whole chicken into a pot, cover it with water and boil it until the chicken is cooked through.

The water the chicken was boiled in is used as the broth for the soup and the chicken is removed and added back in later. While there is nothing fundamentally wrong with this method, I did see a few areas where improvements could be made.

First off, we start with the meat. I use two chicken legs and thighs because they’re tasty and I believe they hold up the best in a soup setting. In a large saucepan over medium heat, heat a small amount of neutral oil until shimmering and add you chicken into the pot.

Allow the chicken to brown on one side (about three to five minute) before flipping and repeating on the other side. Remove the chicken from the pan and set aside (it will NOT be fully cooked at this stage). You should have a good amount of brown bits on the bottom of the pan now. This is exactly what you want as it adds a bunch of chickeny flavour to the chikhirtma.

Reduce the heat to medium-low, melt a pat of butter in the pan and add a finely diced yellow onion. Cook this until softened, around five minutes, before adding in a few cloves of minced garlic. Sautee this until just fragrant and then sprinkle about a tablespoon of all-purpose flour over the onions and garlic. Cook the flour for a minute or two to cook off the raw taste, return your chicken to the pot, and then pour over your chicken stock.

I highly recommend using homemade stock in this recipe as the flavour is much more rich and robust than with storebought, however, storebought stock will do in a pinch. Bring the stock to a boil, reduce the heat to a simmer, cover, and allow to simmer for about an hour, or until your chicken is nearly falling off the bone and has extracted even more flavour into the broth.

Using a pair of tongs, remove the chicken from the pot and transfer to a plate to cool for a few minutes, just until it’s cool enough for you to touch. Shred the chicken into bite-sized pieces, removing the skin and bones and discarding. Set the chicken aside for later.

In a small bowl, lightly beat two egg yolks with a whisk. Then, whisking constantly, slowly ladle in about 125-250 millilitres (about 1/2 to 1 cup) of your soup. This will temper your egg yolks and prevent them from scrambling when you return it to the pot. Pour your egg yolk mixture back into the pot and stir to combine.

Add you shredded chicken, a splash of white wine vinegar and a good amount of freshly chopped cilantro. Stir to combine and taste for seasoning, adding salt, pepper or even splash more vinegar if you feel it needs more acidity.

As you can see, this chikhirtma recipe is fairly easy and straightforward! A unique spin on a classic, this Georgian chicken soup is sure to be a hit amongst all you serve it to!

Are you wondering how to make chikhirtma? Have any questions about this Georgian chicken soup recipe? Let me know in the comments!