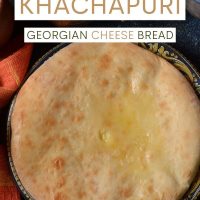 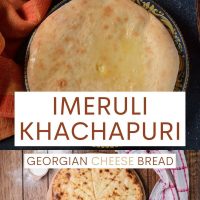 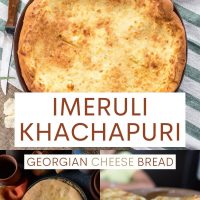 Making an incredible Imeruli khachapuri recipe at home is not a difficult task, though it can seem daunting at the start.

While there are seemingly more varieties of this cheese bread than there are bottles of wine in Georgia (read: a LOT), it’s arguable the Imeruli khachapuri (also known as Imeretian khachapuri) may be the most popular. Though it isn’t necessarily the most photogenic of the cheese-filled breads of Georgia, this Imeruli khachapuri recipe will help you recreate one of the most famous foods of this beautiful country easily in your own kitchen!

What is Imeruli Khachapuri?

Before I jump into the Imeruli khachapuri recipe, we do need to talk about what it actually is! Simply speaking, Imeruli khachapuri is a khachapuri from the Imereti region of west-central Georgian (around the city of Kutaisi) that comes in a flat, circular shape with a cheese filling.

But if you need me to backtrack a bit, we can discuss what khachapuri is on the whole. Literally translated, khachapuri basically means “cheese bread.” The Georgian word khacha (ხაჭა) means “cottage cheese” and puri (პური) simply means bread.

This is probably the most famous dish to come out of Georgia and the term is especially synonymous with the beautiful, boat-shaped Adjaruli khachapuri — which hails from the western Adjara region along the black sea. And while this may be what jumps to mind when thinking of this cheesy bread, Imeruli khachapuri may actually be the most popular iteration of this dish — at least in Georgia.

Regardless if it’s the most popular or not, Imeruli khachapuri happens to be my personal favourite version of this delicious cheesy bread mostly because it is simple and doesn’t feel too rich or indulgent. It feels to me like khachapuri at its most simple form – a basic yeasted circular flatbread that is filled with ample amounts of salty cheese that is typically bound together with a beaten egg.

The cheeses that are typically used is a mixture of Imeruli cheese — which is a brined cheese similar to a feta though slightly more salty and bit less creamy in texture — and sulguni cheese, which is very similar to a mozzarella, though with a bit more of a funky flavour and, again, a bit saltier. The sulguni also melts beautifully allowing for a wonderful cheese stretch.

The pastry part is a simple yeasted dough that is light and tender and is not overbearing or too dense. All in all, it really is the perfect marriage of bread and cheese and once you’ve had it, you will realise that Imeruli khachapuri is truly one of life’s simple pleasures.

And if you’re interested in cheese-filled pastries from around the world, make sure to check out my Maltese pastizzi recipe! Or if you’re keen to explore more Georgian filled breads, have a look at my lobiani recipe!

How to Make Imeruli Khachapuri

Now that we’ve covered exactly what khachapuri is, now it’s time to get started on this Imeretian khachapuri recipe. It may seem like a bit of a daunting undertaking and many might get intimidated when it comes to working with a yeasted dough, but I assure you that this is one of the most foolproof recipes out there and it’s not difficult at all if you simply follow these instructions.

The first step to making a khachapuri Imeruli is to make the dough that you will eventually wrap around the cheesy filling. This is a super easy yeasted dough but you do need to make sure that you set aside ample time to allow for the first rise in order to get the results that you’re after — plan about 1-2 hours, though almost all of this is inactive time.

Start with blooming your yeast. Put some milk in a microwave and heat in the 10-second increments until it gets to about 40-45°C (104-113°F). Dissolve a bit of sugar in it and then stir in your active dry yeast and then set aside for about 5 to 10 minutes, or until your milk mixture gets very foamy and gives off a distinct yeasty smell.

Meanwhile, whisk some salt into your flour in a large bowl. Make a well in the centre of the flour and crack one room temperature egg into it — it’s better if the egg is at room temperature because it will keep your entire dough at the same temperature and allow it to rise easier. Pour some oil and your milk and yeast mixture on top of the egg and then mix with a silicone spatula or wooden spoon until a shaggy dough forms.

Once you have a rough dough, turn it out onto a clean work surface (lightly dusted with flour if your dough feels a bit too sticky) and knead until the dough is smooth and just barely tacky — about five minutes.

Shape it into a ball and transfer to a lightly oiled bowl (to prevent it from sticking — and roll your dough ball around in the oil a bit in order to prevent it from drying out) and cover it with a damp tea towel or plastic wrap. Set aside in a warm place and allow to rise until doubled in size — about 1-2 hours depending on how warm your room is.

To make your cheese filling, you’re going to want to use two parts of Imeruli cheese and one part of sulguni cheese. Try to see if you can find these cheeses if you’re not in Georgia — sulguni, in particular, is sometimes available in Russian/Eastern European shops that cater towards immigrants from the former Soviet Union.

If you can’t find these cheeses, you absolutely can sub in feta for Imeruli and low-moisture mozzarella for sulguni and get very similar results — it just won’t be as salty (which may be a good thing) and have a slightly different flavour.

Shred the cheeses on the large holes of a box grater and transfer to a small bowl. Crack an egg over the cheese and mix it all together until it’s homogenous — it should all effectively cling together when packed.

Next, lightly flour a clean work surface (don’t use too much flour or you’re going to struggle to get a good seal on your khachapuri), gently lift your dough from its bowl and pat it out into a circular shape. Using a rolling pin, roll it out until it’s about 25-30 centimetres in diameter (about 10-12 inches).

Using a sharp knife, make four 2.5 centimetre (1 inch) long slits in the centre of the dough in order to let steam escape. Transfer to a parchment-lined baking sheet and bake for 10-15 minutes, or until it puffed, lightly golden and crisp.

Remove from the oven and allow to cool slightly for about 5 minutes before cutting into wedges like a pizza and digging in! Serve with a side of Georgian salad.

*If you can't find Imeruli or sulguni cheeses, then you can substitute feta for the Imeruli and low moisture mozzarella for the sulguni. The texture and flavour will be largely the same.

As you can see, making Imeruli khachapuri isn’t a difficult task in the slightest and it’s one of the most rewarding baking projects out there — you really cannot go wrong with bread and cheese!

Are you a fan of Georgian cheese breads? Have any questions about this Imeruli khachapuri recipe? Let me know in the comments! 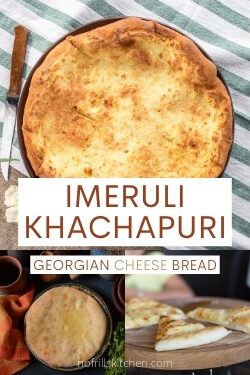