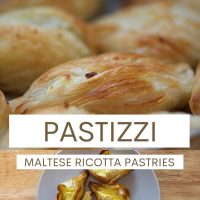 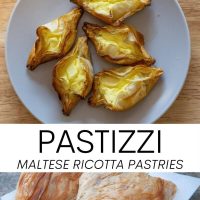 Aside from its crystal clear water, year-round mild climate and vast history, the small island nation of Malta rarely gets noticed for its cuisine – and this is a shame! Along with amazing seafood dishes, Malta also does a pastry called pastizzi incredibly well. And ever since my first visit to the beautiful country, I’ve been trying to recreate a pastizzi recipe to enjoy at home.

It took me a while to get it all just right, but I’m pretty happy with the results. And while this pastizzi recipe isn’t going to be as perfect as the flaky pastries that you can get straight from a wood-fired oven in Malta, it’s pretty close!

If you’re wondering how to make Maltese pastizzi quickly and easily at home, then look no further. This pastizzi recipe uses a ricotta filling and store-bought phyllo pastry to recreate the iconic Maltese hand pies in your own home kitchen!

Before getting into this Maltese pastizzi recipe using phyllo dough, let’s briefly discuss just what pastizzi are. Pastizzi (singular is pastizz) are a small pastry made with a crisp flaky dough and typically stuffed with fillings like ricotta cheese, mushy peas or chicken. While they are typically savoury, I have seen Nutella-filled pastizzi before!

Though pastizzi do have a number of different fillings, I’m partial to the cheese-filled version. If you like cheese-filled pastries as much as I do, then make sure to check out my Imeruli khachapuri recipe!

Pastizzi dough is made through a laminating process (similar to making puff pastry from scratch) that is time-consuming and finicky. The result, however, is an incredibly crisp and flaky pastry. After the pastries are filled, they’re typically baked in a very hot wood-fired oven and then eaten hot.

To make the pastries easier to execute for the home cook, I’ve swapped making a homemade dough for what I’ve found to be the best possible substitute: phyllo pastry. This makes it incredibly easy to make at home.

How to Make Pastizzi

Now let’s get into this pastizzi recipe! As I’ve already said, it’s actually very easy and you can be enjoying some freshly-baked pastizzi within about 30 minutes of starting the recipe (provided you’ve defrosted your phyllo dough already!).

We’ll start with making the filling, which is simply mixing some ricotta cheese with an egg.

Adding an egg to the filling makes it a bit more substantial and allows it to set and puff up a bit when baking. Mix the egg and ricotta until the mixture is well-combined and there are no streaks of egg left over.

Then season liberally with salt and pepper – if you don’t want to see flecks of pepper in the filling, use white pepper. This doesn’t bother me so I tend to use black pepper. Set the filling aside for later.

Now it’s time to prepare your phyllo pastry. We’re only using 6 sheets of pastry for this recipe, but you do need to make sure it is completely thawed before using it because the pastry will break if it isn’t.

When working with phyllo pastry, we only use one sheet at a time and keep the remaining sheets covered under a tamp tea towel. This prevents the dough from drying out and becoming brittle and unworkable.

Unlike with something like pie crust, I find using store-bought phyllo pastry to be a completely fine and workable substitute.

Lay your first sheet of pastry on a clean work surface and brush generously with melted butter. Then, gently drape another piece of phyllo dough on top of the last piece. Brush with more butter and repeat again. Continue doing this until you reach you sixth piece of pastry, which you should not brush with butter.

Now, using a 10cm (4-inch) circular cutter (or a large drinking glass if that’s what you have), gently punch out 10 circles of your phyllo layers.

Working one circle at a time, spoon about a tablespoon of your ricotta filling into the centre of the circle.

Then, gently fold the pastry in half and pinch the ends together, flattening the base on your work surface. Transfer the formed pastizz to a parchment-lined baking sheet and continue with the remaining dough circles.

Next, move the baking sheet to a 220°C/425°F oven and bake for about 10 minutes or until they are deeply golden brown, the layers have begun to separate and the filling is puffed slightly.

Remove them from the oven and allow to cool for about five minutes before serving.

The pastizzi are best eaten the day they are made, preferably within a couple of hours. They tend to get a bit soft and soggy if they are left for more than a day.

And that’s how you make Maltese pastizzi with phyllo dough! These pastries are super easy to make and they are well worth the little time it takes. One bite is sure to transport you to the streets of Valletta!

Are you looking for a Maltese pastizzi recipe? Have any questions? Let me know in the comments! 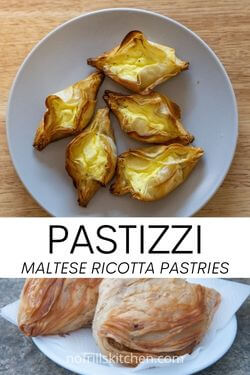