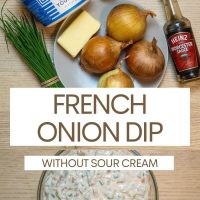 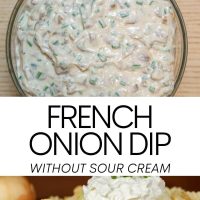 Is it possible to make a delicious and flavourful French onion dip without sour cream, cream cheese, mayonnaise or the ever-present powdered soup mix? Yes, it is, and this recipe may just be the most delicious and indulgent dip you will taste.

Using a base of intensely caramelised onions mixed with creamy greek yoghurt and a bit of ricotta cheese, this dip is easy (so long as you’re willing to take the time to caramelise the onions) and super delicious.

It only uses a handful of ingredients and, though it is going to take a bit more time than mixing together a packet of soup mix with some sour cream, it’s not hard to make at all.

So if you’re looking for the perfect crowd-pleasing dip, this onion dip recipe without sour cream is sure to be a hit!

How to Make Onion Dip Without Sour Cream

The first step of making this onion dip is to caramelise the onions.

I have an entire article and recipe for caramelised onions that explains the process in quite a bit of detail, however, I’ll go through a few steps here, as well. It’s also the same process used when making French onion soup.

Keep in mind that it does take about 45 minutes and an hour to completely caramelise onions, but a good 30 minutes of it (at least) is pretty hands-off. You can easily do other things when caramelising onions – it doesn’t have to take up all of your energy.

Thinly slice a few yellow onions. Add a couple of tablespoons of butter to a large, heavy-bottomed saucepan (I like to use cast iron) and melt it over medium-low heat. Add your onions, a generous pinch of salt and cover the pot. This will allow the onions to quickly soften and release their moisture.

Keep the pot covered until the onions have released a lot of their moisture, they have softened and have reduced in size by about half. Stir occasionally to prevent anything from browning and to check the progress, but this should take about 20-30 minutes.

Uncover the pot and continue cooking the onions, stirring frequently, for another 20-30 minutes.

During that time, you will notice them slowly take on a uniform caramelised colour that will go from pale honey to deep golden brown. If you notice any uneven browning or burning, add a splash of water here and there to stop that from happening.

Once the onions are at the desired stage of golden brown, remove them from the pot and allow them to cool a bit – you just don’t want them to be too hot when you add them to the rest of the dip.

In the meantime, in a large bowl, whisk together some Greek yoghurt and ricotta cheese. Make sure to use a thick, Greek-style yoghurt as a thinner yoghurt isn’t going to yield the same consistency that you want.

To the yoghurt mixture, add a bunch of chopped fresh chives and a few teaspoons of Worcestershire sauce. Then, add in your caramelised onions and stir until thoroughly combined.

Taste the dip to adjust for seasoning, adding salt and pepper where you think it’s needed.

Then, transfer the dip to an airtight container and refrigerate for at least an hour before serving. This is a really important step as it allows all of the flavours to steep and develop more fully.

Making onion dip without sour cream, cream cheese, soup mix or mayonnaise is easy and delicious! So long as you’re willing to take the time to caramelise onions, you’re sure to love this delicious and flavourful dip.

Are you wondering how to make French onion dip? Have any questions about this recipe? Let me know in the comments! 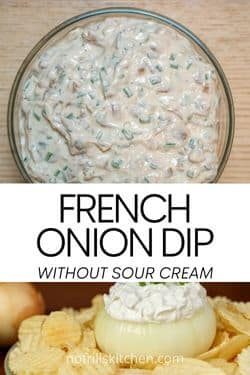