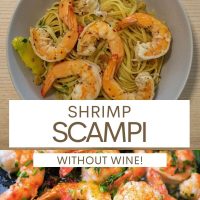 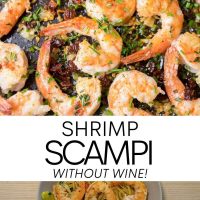 Shrimp scampi is an Italian-American classic that adorns restaurant menus across the country, and there is no doubt as to why it’s so popular. However, this isn’t a dish that has to be enjoyed in a restaurant as it is incredibly easy to make at home. And while most iterations of this seafood dish use white wine as a base for the sauce, this isn’t entirely necessary. In fact, I’ve developed a shrimp scampi recipe without wine that tastes so delicious you won’t even know that it’s missing!

This dish is incredibly easy to make and is an excellent choice if you’re looking for a quick yet delicious dinner option. Similarly to a number of my other pasta dishes (see my fettuccine alfredo, carbonara, lemon pasta or mushroom bucatini recipes), there are only a few ingredients require to make this incredibly flavourful meal.

So if you’re wondering how to make shrimp scampi without wine, look no further. This recipe is easy and delicious and I promise that you won’t even notice that the wine is missing!

What is Shrimp Scampi?

Before I jump into the recipe, let’s talk a bit about what shrimp scampi actually is. Especially for those based in Europe, this may seem like a confusing term as shrimp and scampi are two different, yet similar, animals and neither word is an adjective describing a style of dish.

In America, however, the term shrimp scampi refers to a shrimp dish that is cooked in a garlic, butter and (usually) white wine sauce. Where the confusion may come in is that scampi are actually a kind of shellfish in the lobster family that are similar to crayfish. They are common in European waters and are particularly prolific in the Mediterranean.

Shrimp scampi was developed by early Italian immigrants to America who were preparing seafood in the same style as they did in Italy. Because scampi weren’t available in the USA, shrimp were used instead. And so the dish was born.

You will see shrimp scampi served on its own, however, it is much more common to be served over pasta. I definitely prefer it in the latter style, as the sauce compliments the pasta beautifully.

How to Make Shrimp Scampi without Wine

Now it comes to how to make this shrimp scampi recipe without wine. I add a few extra steps to this recipe to give it a more robust flavour than traditionally called for, especially to account for the lack of the wine. I promise that it is nothing too complicated.

The first step to this shrimp scamp recipe is to prepare your shrimp. I urge you to you use whole, fresh shrimp in this recipe and to forgo frozen, prepared shrimp. The flavour difference is incredibly notable and it doesn’t require that much extra work. You can also use the shells and heads of the shrimp to make a broth that will act as a flavourful stand-in for wine.

Remove the heads off your shrimp and peel them, leaving the tails on. Devein the shrimp by making a shallow incision along the top of the shrimp with a sharp knife. Use the tip of the knife to remove the black vein and discard. Season the shrimp liberally with salt and pepper.

Put the shrimp heads and tails in a small saucepan and cover with about a litre of cold water. Cover the pot and bring to a gentle simmer over low heat. Allow to simmer for about thirty minutes to one hour before straining through a fine mesh sieve and setting aside. You can then discard the shells and heads.

Now, because this is a shrimp scampi linguine, the next step is to cook your pasta. This recipe comes together in a flash and needs your attention so the shrimp don’t overcook, so I recommend cooking for pasta before you start assembling the sauce and shrimp.

Bring a large pot of heavily salted water to a rolling boil and add your pasta. I recommend using linguine, but you can really use whatever kind of pasta you’d like.

Cook the pasta for about 2 minutes less than the package requires (we’ll finish cooking it in the sauce!), drain it and toss the noodles in a bit of olive oil to prevent them from sticking. Set the pasta aside until you need it.

Now it’s time to make the sauce! In a large skillet over medium-high heat, melt your butter along with a little bit of oil. Add your sliced garlic and red chilli flakes and cook them until very fragrant and the garlic begins to turn a pale golden brown, about three to five minutes.

Then, add your shrimp in one layer to the skillet. Cook on one side until they are just beginning to turn pink before flipping, about thirty seconds to one minute depending on the size of your shrimp.

Add a couple of strips of lemon zest, some lemon juice, a dash of fish sauce and about 250 millilitres (or 1 cup) of the reserved shrimp broth.

Let the sauce simmer until the shrimp are pink and have just turned completely opaque, only a minute or two longer. Remove the shrimp from the skillet and set aside.

Add the pasta to the skillet along with some chopped fresh parsley. Toss the pasta in the sauce until it’s heated through and al dente, another two minutes or so.

Then, turn off the heat and add the shrimp back into the skillet along with any accumulated juices.

Now, all there is left to do is serve and dig in! This dish comes together so quickly and it is 100% worth it.

Any remaining shrimp broth can be refrigerated or frozen and used in other recipes -- such as a seafood risotto, seafood soup or even a curry in lieu of chicken broth or water.

Making this shrimp scampi recipe without white wine is incredibly easy and yields a delicious and flavourful dish without having to crack open a bottle!

Are you wondering how to make shrimp scampi linguine without wine? Have any questions about this recipe? Let me know in the comments! 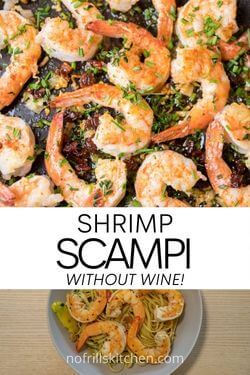 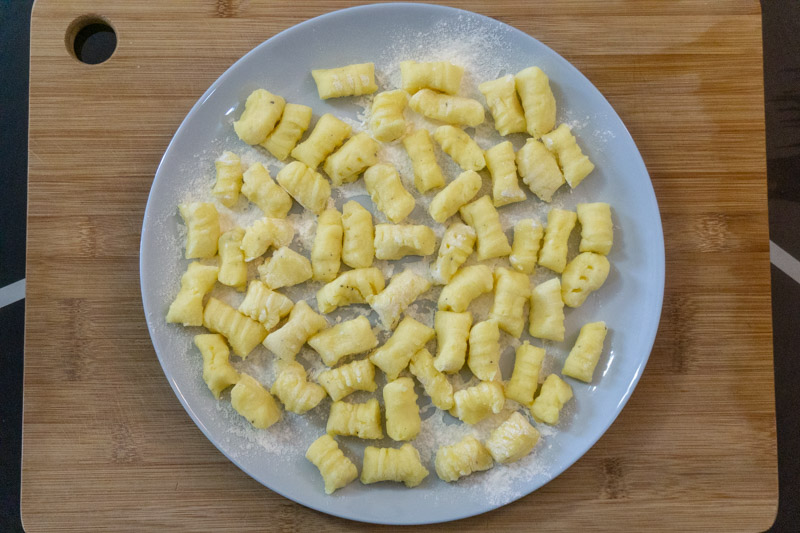 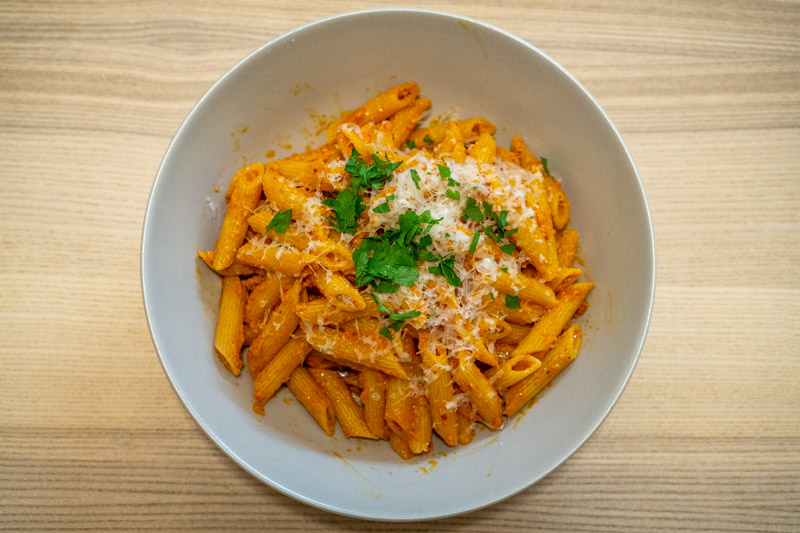 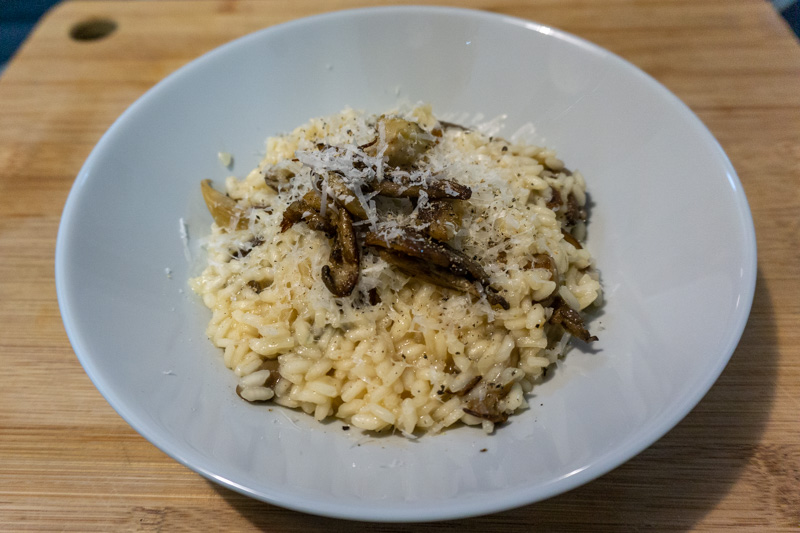