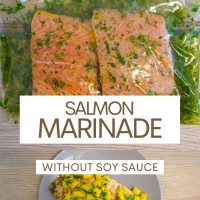 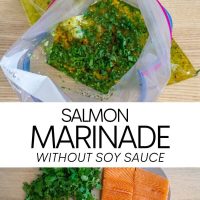 Salmon is a healthy, quick and easy meal to whip up on any day of the week, but if you want to jazz it up a bit, then this recipe for a lime and cilantro salmon marinade without soy sauce is sure to be a hit.

The marinade only takes a few minutes to throw together and you don’t need to plan well in advance in order to soak your salmon in flavour – it only marinates for thirty minutes or less!

While salmon is an easy thing to cook and it is so delicious it doesn’t even need anything extra, sometimes it can do well if you decide to spice it up with a little bit more than simply some lemon, salt and pepper.

And a great way to do that is with a marinade! This recipe doesn’t call for any special ingredients and is even a salmon marinade recipe without soy sauce. In fact, the marinade itself only uses five ingredients.

Making this salmon marinade without soy sauce could not be easier, and you can even build it in the zip-top bag that your salmon will sit in – so you don’t need to dirty any dishes!

To start with this marinade, we’re going to add a good amount of olive oil. Use an extra virgin olive oil here because it is there to flavour the salmon – you won’t be eating the entirety of the oil that we use in this marinade.

To the oil, add the zest of one lime. Make sure to zest the lime before you cut it in half to juice it (you will be doing that later) because it is very hard to zest a cut piece of citrus.

Then, using the same rasp-style grater that you used to zest the lime, grate in a few cloves of garlic to the olive oil mixture.

Then, add the juice of your lime to the bag. After that, chop a bunch of cilantro and add it to the bag as well. Season the marinade liberally with salt and pepper and then seal the bag.

Squish the marinade around in the bag until it is well combined and then add in your salmon fillets.

It’s super important that you do not let the salmon sit in the marinade for too long – any more than 30 minutes will cause the lime juice to effectively cook the salmon and completely ruin the texture of your fish. It is the same process that goes into making ceviche, but that isn’t what we’re making here!

While your salmon is marinating, go ahead and preheat your oven to 180°C (350°F). Line a small baking sheet with parchment paper.

After your salmon has spent about twenty to thirty minutes sitting in its flavourful bath (the marinade), take the fillets out and let the excess marinade drip off. Then place the salmon (skin-side down if your fillets have skin) on the baking sheet.

Cook your salmon in your preheated oven for about fifteen minutes, or until the internal temperature reaches 52°C (125°F). Then, remove the salmon from the oven and let it rest for about five minutes before serving.

This salmon pairs particularly well with a topping of my mango salsa, which is something that you can whip up in the time it takes for the fish to marinate and cook.

As you can see, preparing a simple salmon marinade without soy sauce is one of the easiest dinners you could make any day of the week. The effort is minimal, but the results are vibrant, zesty and very flavourful and this healthy meal is sure to become a quick favourite!

Are you wondering how to make a salmon marinade without soy sauce? Have any questions about this recipe? Let me know in the comments! 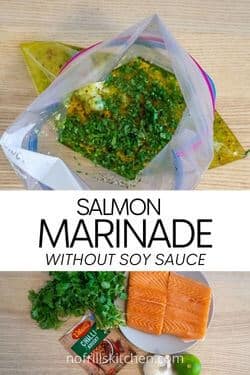