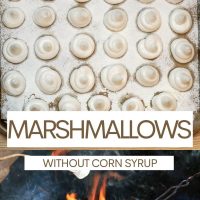 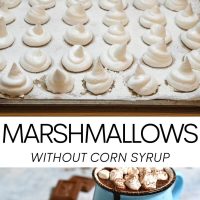 Making homemade marshmallows without corn syrup is an easier task than it may sound and it’s super fun once you figure out how to do it.

Basically just an Italian meringue with added gelatin, marshmallows are a great thing to make if you have an excess of egg whites (something you may have if you’ve made my aioli or Caesar dressing recipes…).

However, most recipes for marshmallows out there call for corn syrup. Whether you don’t want to use this ingredient or you’re like me and don’t live in an area where it’s widely available (or you simply forgot to pick it up at the supermarket!), you’ll be happy to find out that it’s not only entirely possible but positively easy to make marshmallows without corn syrup.

So if you’re on the hunt for a recipe for marshmallows that doesn’t use any corn syrup, you’ve come to the right place. The process before can be a little bit technical, but once you know what you’re looking for, it’s a really easy and fun thing to do that looks very impressive!

How to Make Marshmallows Without Corn Syrup

There are a few moving parts in the recipe so it is important that you read the entire recipe card below and this entire outline of the steps before you start making these.

The process is simple, but you need to be able to do a few things at once.

The first step is to soften your gelatin. This is easy – simply sprinkle your gelatin powder over a bit of cool water and set it aside for at least ten minutes. We will get back to this nearing the end of our process.

The next step is to make your sugar syrup. This is usually where corn syrup is called for in marshmallow recipes as it makes it less likely that you will get crystals forming in your syrup.

You can avoid this by ensuring that your sugar is completely dissolved before it comes to a boil – eliminating the need for corn syrup. It’s the same process that’s used in my chewy caramel, peanut brittle and caramel popcorn recipes.

Add a bit of water to your sugar and set it over medium-low to medium heat. Stir constantly to get the sugar completely dissolved (the liquid will be clear) before bringing it up to a boil.

If the syrup is coming up to a boil before the sugar is dissolved, simply remove it from the heat and keep stirring until you’ve dissolved all of the sugar.

Once the syrup is boiling, stop stirring and wash the sides down with a pastry brush dipped in water to get rid of any crystals on the side of the pan.

Cook the syrup until it reaches a temperature of 115°C (240°F). You will need either an instant-reed thermometer or a candy thermometer in order to ensure this.

While the sugar syrup is boiling, start to whip your egg whites. There are some marshmallows that simply whip a sugar syrup with gelatin, however, this is an egg white marshmallow recipe without corn syrup. That means it’s essentially an Italian meringue with gelatin added.

If you have one, I recommend using a stand mixer for this – but you can use a hand mixer if you have someone to help you once you begin streaming in the sugar syrup.

With your mixer fitted with the whisk attachment, whip the egg whites on medium speed until they read medium peaks. This means that, when the whisk is lifted, the tip of the egg foam will hold its shape but not stand straight up.

With the mixer running on medium, slowly and carefully stream in the sugar syrup until it is completely incorporated.

Increase the mixer speed to high and whip the meringue until the sides of the bowl are cool to the touch and the meringue reaches stiff peaks (when the tip of the meringue stands up completely straight without slumping at all). The meringue should be fluid and glossy.

When your sugar syrup is incorporated, scrape your softened gelatin into the same pan that the syrup was in (there is no need to wash it). Using either the residual heat from the pan or over very low heat, melt the gelatin until it is just liquid and completely clear.

Once your meringue has reached stiff peaks, whip in the melted gelatin along with a bit of vanilla. Whip this until just incorporated.

Now, you can either scrape the entire marshmallow mixture into a baking dish that has been dusted with a mixture of icing sugar and cornstarch (or sprayed liberally with cooking spray) or you can transfer the mixture to a piping bag and pipe some marshmallows onto a sheet tray prepped in the same way. I prefer the latter way as I find it’s easier and cleaner.

Once piped or scraped into a baking dish, allow the marshmallows to set at room temperature for at least four hours before using. If you’ve gone the baking dish route, you can then cut them into squares.

If you're using a hand mixer rather than a stand mixer, it can be helpful to have a friend stream the syrup into the bowl while someone else holds the mixer, rather than trying to do it all by yourself!

Making marshmallows without corn syrup can be a bit technical, but it is surprisingly easy and a super fun activity. They are also absolutely delightful atop a steam mug of hot chocolate!

Are you wondering how to make homemade marshmallows? Have any questions about this recipe? Let me know in the comments! 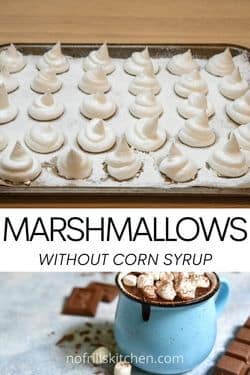